Author KJ Moullen on the writing for The Heir + Giveaway

Today I have a tour stop for the YA fantasy The Heir. The Author K. J. Moullen stopped by to talk about the writing of the novel and how it came to be. Amazing stuff. And I love that purple cover. Purple is my favorite color... 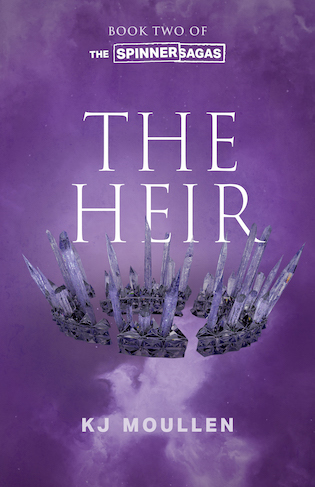 Entrusted with the safe keeping of The Book & the wickedness contained in it, Blaine & Elian embark on a journey filled with unusual creatures & a looming prophecy in the unfamiliar & ancient land of Vestia. First, they have to find their way back to each other, trusting new allies & befriending old foes along the way.

With time running out & the fate of the universe resting squarely upon their shoulders, Blaine & Elian face an unknown enemy who will stop at nothing to unleash the evil soul trapped in The Book. But Elian knows a secret about Blaine’s destiny. Will the secret prophecy divide their pathways, letting doubt & fear sabotage all they have accomplished?

The Heir is the second book in the YA fantasy series The Spinner Sagas. To say that this series has been burning in the recesses of my mind would be an understatement. I have always found writing to be an escape, whether it was poetry, short stories or the starting of a new novel, it has been a constant companion.

I began my journey writing The Spinner Sagas about fourteen years ago, little did I know then that this would one day turn into a series of novels. Multiply times in the past I had started writing similar stories, but not until I went back and reread some of these stories from middle school and high school did I realize that Blaine and Elian (the main characters in the books) had been in every single story. Of course, the names were different but everything about them were eerily similar. I came to the conclusion that these characters have been stuck in my head for years just waiting for their story to be told.

After completing the first book in the series, The Telling, I never had the intention of pursing the route of publishing, I honestly was just so proud of finally finishing a manuscript that I had started. The thought of putting a piece of myself out into the world for all to see, terrified me, but after gentle prodding from my   family and a close friend, I took a leap of faith and published. It has been quite the adventure for me.

The Heir is a continuation of Blaine’s journey of self-discovery on an unknown pathway of dark family secrets, new found magic and ancient prophecies. Mix in a little romance and unexpected allies, you have the perfect formula for adventure and intrigue. The Heir took me just over a year to write. Compared to The Telling, which took twelve years to complete.

I don’t outline my books as I create them. I have a loose idea of what the story will be about but prefer to write and see where the creative muse takes me. During the writing process, I’m constantly brain storming and bouncing ideas around, sometimes my best ideas come when I am out working in the gardens. Making time to write productively can be difficult at times when your juggling family and work but it’s always such a fantastic feeling to finish a manuscript. Currently I’m in the process of writing the third book in the series. I’m excited to see where this one takes me. 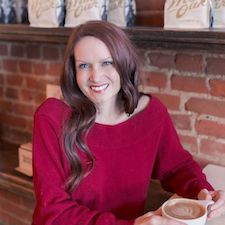 K.J Moullen started her life as an adventurer. Always loving the outdoors, whether it was playing king of the hill with her pet goat in southern California, playing hockey on the frozen lakes of the Kenai peninsula of Alaska or snorkeling and surfing off the shores of Maui. Amongst the breathtaking places she lived her imagination and love for writing knew no limitations allowing for a lifetime of plotlines and characters to be created and written about. She now shares her life’s adventures with her husband and two children in their home in North Texas.

Thanks for being on the tour!