Today I'm super happy to be part of the blog tour for Baculum, a YA Fantasy with demons... Christina Bauer stopped by for an awesome interview where she explained the inspiration for the cover, some of the writing process for the book, and more! There's also a giveaway for a gorgeous dragon journal, so don't forget to scroll down and enter! 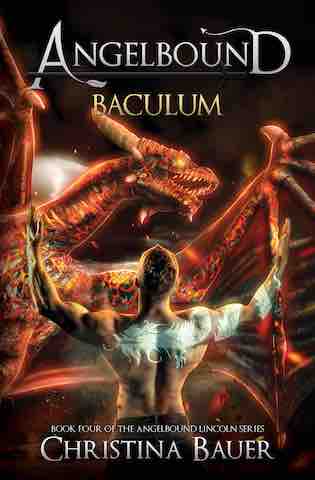 As King of the Thrax, Lincoln leads the most powerful demon fighting force in the after-realms… yet he cherishes nothing more than his Angelbound love, Myla. Which is why the king loses his freaking mind when the sinister Ringmaster Kell targets his pregnant wife.

Ringmaster Kell runs the infamous Viking Games, a series of battles where participants take on the identity of a Norse monster and fight to the death. Sounds good to Lincoln. The king sets aside his crown and enters the arena with one goal only: destroy Ringmaster Kell.

Sometimes, a warrior just needs to ignite his baculum sword and kick a ton of evil ass. But is Lincoln protecting Myla or walking into a trap?

When I directed the artist to create the cover art, I thought the book would be set in a circus and the dragon would be the final act. The style of the magma dragon was inspired by the Balrog in the movie version of The Two Towers (Lord of the Rings).

3.Could you name any book or other work that had an influence on this novel or series?

I studied the Asian story of Rama back in college, and it always struck me how it began with Rama and Sita being married. It really intrigued me since Western stories often end with marriage. I love the idea of following a couple through the adventures of life. BACULUM focuses on the challenges of expecting a child.

I really like the ‘big bad’ in this book. He’s a dark elf from the Norse Universe who is named Kell. It took me a while to find his backstory, but I’m very happy with how it ties in with the theme of parents and children.

Myla Lewis. She’s the one I know best!

If you like quirky storytelling, urban fantasy and strong heroines, then this is for you!

It tells stories from the point of view of Myla’s angelbound love, prince Lincoln.  The stories focus more on his world of demon fighting thrax.

I grew up Roman Catholic and loved learning about angels, demons and saints. Guess I got a little stuck in that head space!

Christina Bauer thinks that fantasy books are like bacon: they just make life better. All of which is why she writes romance novels that feature demons, dragons, wizards, witches, elves, elementals, and a bunch of random stuff that she brainstorms while riding the Boston T. Oh, and she includes lots of humor and kick-ass chicks, too. Christina lives in Newton, MA with her husband, son, and semi-insane golden retriever, Ruby. She loves to connect with her fans at BauersBooks.com.

Thanks for hosting today! 🙂

A wonderful little interlude into the lives of Lincoln and Myla as they take on the Ringmaster Kell. As usual, despite the obstacles in their path, they are triumphant in the end.
I especially enjoyed the inclusion of full colour pictures throughout the book, bringing certain scenes & characters to life.