I'm so excited to reveal the cover for Frozen Hearts and Death Magic, a YA fantasy book in a brand new series, coming out on January 22nd. Don't forget to scroll down to enter to win a $20 gift card. There's also a $22 giveaway on Instagram. Check out the cover here:

Isn't it beautiful? The illustrator is Nyaka-N! This is book 1 in the series Of Fire & Fae, a series with royal magical siblings, family secrets, forbidden love, and a lot of drama!

It all started with a kiss. A forbidden fae kiss.

Naia was raised in the shadow of her twin brother, the crown prince, who has iron magic much more powerful than hers. But Naia has wishes of her own. They awaken when she finds a white fae almost dying in the woods. She only heard of them in stories; the dreaded race that razed cities to the ground, killed her grandparents, almost rid Aluria of humans—until they disappeared. Now, twenty years later, are they back? Is there another war coming?

But the fae is evasive and secretive—and also alluring and fascinating, more beautiful than anyone she’s ever seen. And then it happens: Naia kisses him—and nothing will be the same again.

In another kingdom, Leah, a necromancer princess, has to find a husband in less than four days, during the Gathering, when royals from all over Aluria meet. Her family makes it very clear that she can pick any prince she wants—except one: Naia’s brother. And it turns out that he’s the one; the one who makes her heart beat faster.

Meanwhile, war looms over the land. One of the kingdoms is amassing immense power. The White Fae might be returning. Amidst it all, Naia and her brother struggle with newfound magical powers, family secrets, and most of all, their own treacherous hearts.

Find the book on: 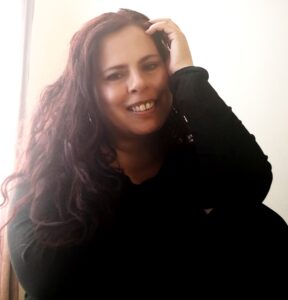 Day Leitao is the writer of the YA fantasy series Kingdom of Curses and Shadows. She's originally from Brazil and lives in Montreal with her son. She loves to write stories with romance, humor, magic, and action, and lets her characters take over her stories.

Enter to win a $22 gift card on Instagram at instagram.com/explore/tags/fhdmcoverreveal/

Hi there! I’m checking out your books for the first time.

Hi there ! it is great