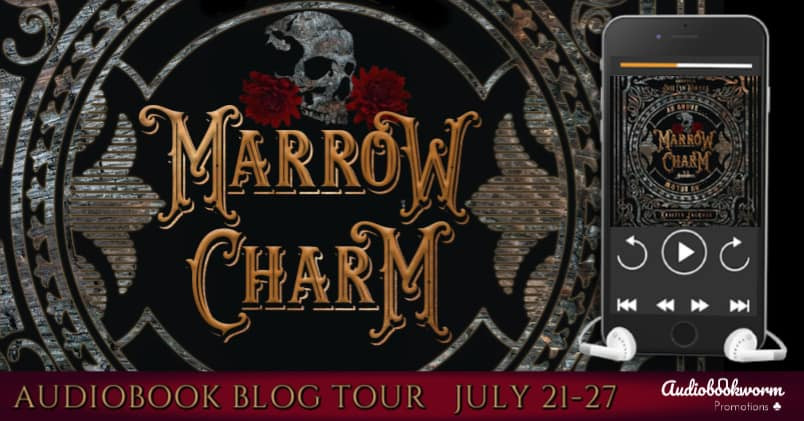 Today I’m hosting a spot for the tour for Marrow Charm audiobook, a lovely YA fantasy! Author Kristin Jacques stopped by to recomment 10 books to read after (or before) Marrow Charm. Some cool recommendations! And maybe if you like those books you’ll enjoy Marrow charm, too.

“In his pursuit of the occult, the Third Reich opened the Gate to a realm of magic and brought the world to ruin. The Gate was eventually closed, but they were already in our world, and they were hungry.” (The Lost History, Library of Avergard)

Azure “Azzy” Brimvine lives in a world decimated by magic, where humans have retreated underground from the overwhelming dangers of the surface. But Below is no safer than Above. Magic-borne plagues continue to eat away at the remaining human cities – a sickness that doesn’t merely kill, but creates aberrations from the stricken. People twisted by magic into something dark, dangerous, and powerful. It is an existence of fear and constant dread.

When Azzy’s brother Armin is infected and cast out into the Above, she sets out after him, determined to be there for him, no matter what he becomes. The world Above is full of monsters, both wild and cunning, some more human than Azzy was led to believe.

Armin is captured and bound for the auction block of Avergard – a ruthless city of inhuman lords and twisted creatures. To reach him, Azzy must brave the perils of the Above and the chaotic life forms created by the Gate. To reach him, she must find allies and forge new bonds in this broken world. And Azzy must reach him, before Armin’s new power is used to open the Gate once more.

Kristin Jacques is speculative fiction author and content creator from New England. She holds a B.A. in Creative Writing from Wells College.

Her contemporary fantasy Ragnarök Unwound was published with Sky Forest Press in January of 2019. Her award-winning dark fantasy Marrow Charm was released from Parliament House Press in October 2019. In November 2019, Marrow Charm won the Fantasy Fiction category at American Bookfest. In 2020, she signed a four-book deal with City Owl Press for the paranormal series Midnight Guardians.

When not writing, she is juggling two rambunctious boys, spoiling her cats, and catching up on a massive TBR pile. She is currently working on projects full of magic, mystery, and delight.

Amie Lyn Hornick is a professional audiobook narrator and producer with a true passion for bringing stories to life through engaging and versatile presentations. After graduating from St. Lawrence University with double majors in English and Psychology, she spent the next few years working in marketing and graphic design. For the last two years, however, she has completely immersed herself in the audiobook industry and has loved every minute of it. Based in Upstate New York, Amie spends much of her free time playing far too many video games and exploring the Adirondacks with her husband and two incredibly cute rescue dogs (who don’t quite understand why their mom spends most days speaking in weird voices).

Plugging you into the audio community since 2016.

Author Christina Bauer interview on her writing process and her novel Calla + giveaway
M. K. Adams on what book everyone should read + Child of Destiny tour and giveaway
A spectacle of Souls by Jessica Julien Excerpt and Giveaway
The Veiled Descendents by Sophia Menesini Dream Cast and Giveaway
Within Magic Audiobook is Out!
07/22/2020 - Category: Book tour/blitz / Uncategorized - Tags: Audiobook / Audiobookworm tours / Book Tour

M. K. Adams on what book everyone should read + Child of Destiny tour and giveaway

A spectacle of Souls by Jessica Julien Excerpt and Giveaway

The Veiled Descendents by Sophia Menesini Dream Cast and Giveaway