Today I'm hosting a stop for the book blitz for Monster Academy, by Catherine Banks. Isn't that cover lovely? Scroll down to check an excerpt and enter a $20 giveaway. 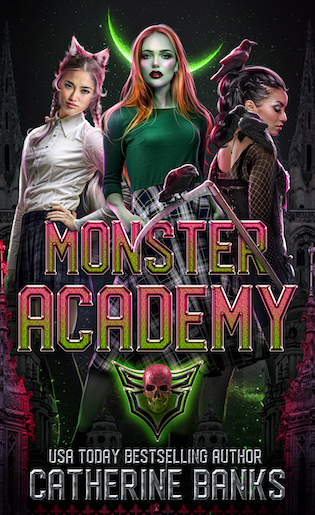 They thought they’d have it easy being monster elites, but these three best friends still have to deal with pop quizzes, crushes, and even worse…humans.

Frances Stein, Loralie Reaper, and Tsukiko Okami just want to play games and relax after their classes. Any hopes of chilling out, however, are destroyed when humans attack Monster Academy and try to use the students for ransom.

In order to defeat the humans and protect their fellow monsters, they must work side by side with their crushes without giving away their secrets. Of course, that would be a lot easier if they were able to stick together, but in a move that betrays insider knowledge, the BFFs are separated.

By tapping into their monstrous powers and working with their crushes, they will open their hearts and unlock abilities long thought dead. But will it be enough to save all of monster-kind? It’s going to be one hell of a year at Monster Academy.

Takumi bowed again. “Yes, sir.” He straightened and looked at me. “Are we providing a guard for Tsukiko?”

“No,” Grandfather and I said at the same time.

Grandfather gave me a glare, and I snapped my mouth closed. My tail swished behind me, but I quickly wrapped it around my leg.

“Not at this time,” Grandfather amended. “If the situation worsens before I am able to return and you believe she needs a guard, then assign one to her.”

“Even if she tries to argue,” Grandfather finished with fire in his eyes.

I closed my mouth and looked down at my shoes. Fine. I got it. I would just make sure that that did not happen.

Behind me, Loralie danced from foot to foot. “Grandfather?” she whispered.

I looked up and saw his lip twitch again. “You may go,” he whispered.

Faster than I had ever seen her move, Loralie cleared the distance between us and the hellhounds. The hounds surrounded her, rubbing their bodies on her and licking her face and hands. She cooed at them while scratching their ears and rubbing the bellies of the ones who had lain down.

The ferocious, black dogs had red eyes that reminded me of the fires of the Underworld, fur that resembled shadows and mist, and razor sharp teeth that could tear through flesh and bone with ease.

And Loralie loved them. As Death’s daughter, she was capable of controlling the hell hounds if needed, but she had such an affinity for them that they just did whatever she asked.

“How long will she do that?” Takumi asked.

“Give her at least thirty minutes,” Grandfather said. “She hasn’t seen hellhounds in several months. I’ll leave it to you, Takumi. Take care of my girls…and the rest of the students.”

He added that ending like he’d almost forgotten there were other kids here. 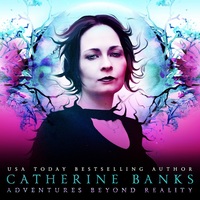 Catherine Banks is a USA Today Bestselling fantasy author who writes in several fantasy subgenres under two pseudonyms. She began writing fiction at only four years old and finished her first full-length novel at the age of fifteen. She is married to her soulmate and best friend, Avery, who she has two amazing children with. After her full-time job, she reads books, plays video games, and watches anime shows and movies with her family to relax. Although she has lived in Northern California her entire life, she dreams of traveling around the world. Catherine is also C.E.O. of Turbo Kitten Industries™, a company with many hats including being a book publisher and Etsy store full of nerdy fun.

This sounds like a great read. I love the cover art.