Today I'm happy to be part of the blog tour for Power Divided, book 1 in the fantasy series The Evolutionaries. Author S. Behr stopped by to talk about her dream cast for the book. Check it out. There's also a giveaway for print copies and fun swag, so don't forget to scroll down and enter. 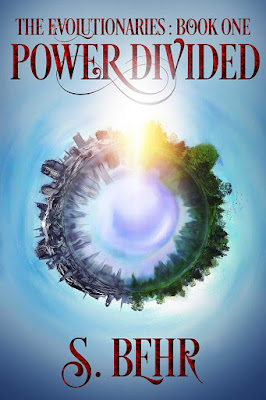 A runaway princess with elemental powers stumbles upon a thousands-year-old
archive of ancient tech that will forever change her utopian kingdom.

The citizens of Amera are blessed with a range of extraordinary powers ¬– from
telepathy and healing to growing plants and breathing under water. As
descendants of genetically modified humans desperate to survive an ice age,
Amerans have built a peaceful, prosperous kingdom uniting nine realms, each
with their own king and queen.

Violet is a princess of Neyr, the third of the nine realms of Amera, living in the
transformed ruins of ancient New York City, high up in the reborn Chrysler
building. Born into Neyr’s talented ruling family, she struggles to show
evidence of any special power herself. Raised by one of the most powerful
healers in Ameran history, Violet wants more than anything to pass her
Criterion, a test all citizens must take to prove they are worthy and to find
their place in society. But when her powers explode to catastrophic effect in
front of her entire court, she runs from the unthinkable damage and misery she
has caused.

In her desperate escape, Violet stumbles upon an incredible archive of ancient
knowledge and awakens Hailey, an artificial intelligence relic who reveals
hidden truths that could be the key to her return home.

But when the sanctuary of the Amera is threatened by humans, old enemies of Amera
who live in violent colonies beyond Amera’s borders, Violet must master her
burgeoning powers and find a way to protect her idyllic kingdom from the
outside world.

A thrilling, action-packed blend of Young Adult fantasy and post-apocalyptic
science fiction. Perfect for fans of the Lunar Chronicles and Shatter Me
series.

"This first volume in the Evolutionaries series skillfully balances intriguing
worldbuilding, whose details are slowly revealed, with well-paced action
sequences. It also ably handles Violet's character development along the way,
while also offering a diverse, lovable supporting cast whose members become the
protagonist's close friends and allies. The novel effectively addresses themes
of cooperation and isolationism, as well as autonomy, consent, and moving on
with one's life after learning of long-held secrets." excerpt from
Kirkus Review about Power Divided.

For my MC Violet- a young Kristen Kreuk. 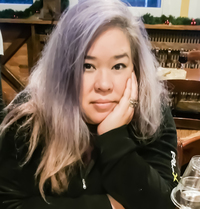 S. Behr is a true child of the world, born halfway around the globe she now resides in Texas with
her husband and their family, and fur babies. Almost two decades as a
professional photographer, featured in dozens of print features, covers, books
for her work, she used her love of wedding photography and used into her career
as an Author. Stephanie is a huge fan of Julie Kagawa, Marissa Meyer, Tahereh
Mafi to name a few!

2 winners will win a finished copy of POWER DIVIDED & swag packs that include magnets,& tote bags, US Only.