Today I'm super happy to be part of the tour for What Big Teeth, by Rose Szabo. Szabo stopped by for an awesome interview, mentioning how the first draft of What Big Teeth came to be, their approach to worldbuilding, and more.  Don't forget to enter to win a copy of the book! 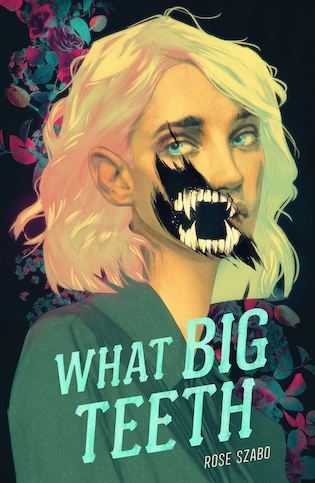 Rose Szabo’s thrilling debut What Big Teeth is a dark, gothic fantasy YA novel about a teen girl who returns home to her strange, wild family after years of estrangement, perfect for fans of Wilder Girls.

Eleanor Zarrin has been estranged from her wild family for years. When she flees boarding school after a horrifying incident, she goes to the only place she thinks is safe: the home she left behind. But when she gets there, she struggles to fit in with her monstrous relatives, who prowl the woods around the family estate and read fortunes in the guts of birds.

Eleanor finds herself desperately trying to hold the family together. In order to save them all Eleanor must learn to embrace her family of monsters and tame the darkness inside her.

Exquisitely terrifying, beautiful, and strange, this fierce paranormal fantasy will sink its teeth into you and never let go.

Can you explain a little about What Big Teeth and what kind of readers will enjoy it?

What Big Teeth is about a girl coming back to her family home after a long time away, and realizing that they’re different, and she’s different. In some ways, that’s a very old story. I think that will speak to people who are at the end of high school or starting college, who are trying to figure out who they want to be, and how much they’re going to adhere to, or abandon, their family’s way of life.

What’s your approach to worldbuilding?

Worldbuilding is my favorite part of writing. I tend to start with an image that I saw in the real world, or something from a dream, and then I start disassembling and reconstructing a fictional world around that idea, asking myself what else would need to change for this new thing to exist. Like: In a silent country, how do people communicate? Or, what’s the genetic probability of being a second generation werewolf? Those “and then what” questions often end up producing conflict, so my favorite stories that I tell tend to grow directly from worldbuilding.

Did anything unforeseen or unusual happen when writing What Big Teeth?

Well, yes--I wrote the first draft of it, about 50,000 words, in a single 24-hour period. I’d had this idea kicking around in my head for years, but never really wrote down anything compelling about it. So one afternoon I decided to just go for it. I drank a lot of coffee and kept eating bacon and egg sandwiches until I fell asleep around 5 AM, and then woke up and finished it early the next day. All I really had at the beginning were characters and a setting, so it was a lot of fun to be writing and to have each sentence lead to the next until I realized I was closing in on an ending. Of course, revising it was a nightmare since I had done zero planning.

This idea of a strange family and some of the themes in the novel would fit well in literary fiction. Where do you think What Big Teeth fits in terms of genre?

Literary fiction, to me, often feels like a genre of exclusion--like, it’s literary fiction if it doesn’t have werewolves or meet-cutes or a murder mystery or a dragon. So I’m happy to be in YA horror. I’d hope that someday my work is considered literature with a capital L, as in people read and study it and talk about what we can learn about the styles of the time period, but that’s pretty far outside of my control. I think that what I love about some fiction from the literary category (if it is a category?) is how much attention is paid to the sentence. I try to pay a lot of attention to the construction of beautiful sentences. But I don’t see why we can’t have beautiful prose and teenage werewolves.

Could you name some books that you think might have influenced What Big Teeth?

Influences are everything! I owe a lot to Jeffrey Eugenides’ Middlesex, Ray Bradbury’s From the Dust Returned, Jane Eyre, We Have Always Lived in the Castle, and Geek Love. There are so, so many more, but those are some of the heavy hitters.

Rose Szabo is a nonbinary writer from Richmond, VA, where they live with an assortment of people and animals and teach writing at VCU. They have an MA in English from the University of Maine and an MFA in creative writing from VCU. Their work has been published in See the Elephant and Quaint magazines. What Big Teeth is their first novel.

Thanks for hosting today, Day!