I am super happy to be part of the Blog Tour SHADOWS OF ATLANTIS: SYMBOSIS by Mara Powers. This nlog tour hosted by Rockstar Book Tours. Isn't this cover gorgeous? Read an excerpt below, and, if you are in the US, scroll down for a chance to get a print copy! 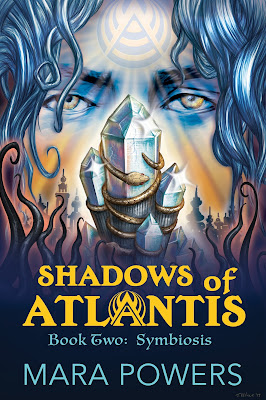 Read for FREE with a Kindle Unlimited
Membership!

The memory of Brigitte’s upbringing in the
Dreamclans slowly fades away as she succumbs to the lavish lifestyle of her new
home. Caught in the grip of The Madness epidemic, she descends into an
elixir-fueled haze. It’s the only way to silence the judgmental voices in her
head. Outside the gilded walls, a looming storm encircles the city, trapping
its inhabitants as they remain blind to the treachery within. Meanwhile,
D’Vinid is reluctantly caught up in the unstoppable currents of fate. A
harrowing encounter with the murderous Shadowmancers launches him on a perilous
journey, while Symbiosis with his new soul-crystal reveals clues to the
corruption of the Crystal Grid. All paths lead back into the forbidden arms of
Brigitte. Is their union a beacon of hope? Or will it unleash the Shadows of Atlantis?
In this eagerly anticipated sequel to Shadows of Atlantis: Awakening, Symbiosis
follows the horrifying psychological descent of a falling civilization. Utopia
is dying - but how can they stop what they can’t even see?

D’Vinid watched lightning flicker in the stormy distance. The clouds looked as though they would reach up and swallow the sun as it traveled toward evening. He couldn’t keep his thoughts straight. The many choices he faced made him inclined to sit and wait for the Watchers to send him a sign. He stared at the road ahead. From here his path split into a crossroads. Had he been able to keep his thoughts straight, he may have been able to make an easy decision.

A jolt vibrated his chest. Flinching, he pulled the flashing soul-crystal from the folds of his overcoat. As if it were on fire, he dangled it from its chain at eye level. Liquid, ethereal whispers caressed his thoughts. The crystal had come to him quite by chance, a gift from his own mother, and yet he couldn’t help but wonder if he had been sensing its arrival in the preceding days.

His dreams al led to this moment.

The crystal had connected to him the moment he touched it. He could feel the flow of his blood. The pulse of its smooth façade thumped with the rhythm of his heartbeat. And it reached out to the Crystal Grid of Atlantis, as if this small shard of crystalized elemental was programmed to wire his soul into its swirling currents.

His head turned as if on its own. In his view stretched the entrance of a nodeyard.

He remembered what happened after the crystal first came to him. Just like this moment, it had steered him to one of Poseidia’s many nodeyards, where the obelisk towers harnessed the mindlight of the people during daily illumination rituals. His feet worked on their own. His mind had grown tired of trying to boss them around.

If they wanted him to go in a particular direction, he was too lazy to disobey.

He had placed the crystal against one of the shining facets of the node.

The ghostly form of a woman materialized inside the crystal tower. Worry creased her ethereal brows. Her eyes knew the sorrow that wrenched at D’Vinid’s heart. “My son.” Her words were one with his thoughts.

D’Vinid felt the tingle of shock spread across his skin. He studied her face with care, memorizing every line, the depth of her eyes as she gazed on him.

“You are her. My mother. Indrius.”

“I am an aspect of her, the part she linked with the soul-crystal.

Indrius was taken by the shadow storm that now approaches. You have been marked to join with the storm. They must not have you.”

“You will soon know who you are. There is something you should see.”

The cells of his body sped up like effervescence. He felt as though he would melt away and fall upwards. His stomach dropped as he reached out for a solid object to hold on to.

He tried to relax, and the bubbling of his cells took over. In a flash, he burst into the sky in dreambody. He merged with the Grid, traveling at the speed of light straight to the heart of Atlantis. He could see a black rift form above the Temple Sect.

It grew bigger as the influx of mindlight flooded to the central torsion field. Some of it went to the Great Crystal, which looked to him like a corona of light inside a pyramid at the heart of the city.

Waves of light emanated from the pyramid and fed the dome-shaped grid. But there was a rip in the fabric of the dome where mindlight poured into the gathering storm. A pain stabbed at his heart, and he jolted back into his body, in the present.

What readers are saying about the SHADOWS OF ATLANTIS series:

"Had me turning the pages obsessively
from the very beginning." Readers Favorite 5-Star Review.

"I have a real interest in mythology
after studying it in college. I had high hopes for the first in Mara Powers's
fantasy saga and I was not disappointed." -Bookish Picks 5-Star Review

"Mysterious., alluring and so engaging,
it draws you in from the very first chapter and takes you on a fast-paced
journey of discovery and danger, right up to its unpredictable
conclusion." -Kickass Reads 5-Star Review 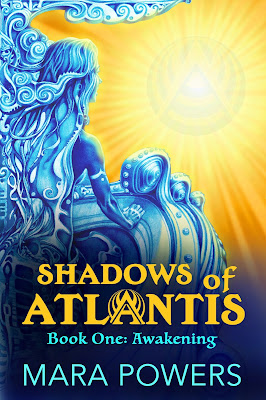 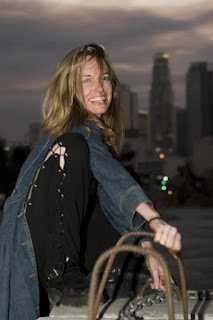 Mara Powers is a rebel of the
written word who has tackled the monumental task of recreating Atlantis. When
she was 16 in Fort Collins, Colorado, she began visiting the library in search
of things she couldn't learn in school. Her goal was to re-define her religion.
She studied theology voraciously until she discovered the concept of
reincarnation though Hinduism. It was the answer to a lifelong existential
crisis that had plagued her for many sleepless nights. The study of
reincarnation led her to the channel Edgar Cayce. In his many books, she found
his past life readings of lifetimes spent in Atlantis. This was the beginning
of a lifelong quest to unravel the secrets of this mystery. She has spent
upwards of 30 years exploring the labyrinth of ancient civilizations. Her
decision to turn it all into a high concept, visionary fantasy series stems
from her study of the esoteric depiction of Atlantis. With the other half of
her research rooted in the secular, it was the best way to illustrate both aspects
of this fascinating legend. Her work is the legacy of the legend.

1 lucky winner will
receive an audiobook download from Audible, International.