Testing a different cover for Kissing Magic – What do you think?

Let me cut to the chase. I’m testing a different cover for Kissing Magic, and if you answer a poll below, telling me what you think, you’ll be super helpful, I’ll be happy, and you’ll enter to win a $10 gift card!

I love the covers for Portals to Whyland. They’re fun, joyful, have cool colors, and portray character progression very well.

The artist is Xilveroxas, and she’s amazing.

Check the covers for the series:

I love the color progression, the details, everything about them.

That said, I was considering a cover for the box set (yes, it’s coming), and thought it would be cool to have a magic kiss. The series has a few magic kisses, especially in books 2 and 3.

So I asked another super talented illustrator, Natalia Sorokina, to do a magic kiss. The result is awesome.

I ended up deciding that it would be better for Kissing Magic.

I think it’s a fun, cover, super pretty, and has a magic kiss. And the colors! ?

The only problem is that it might look like romance, and the novel is romantic fantasy, not really romance. It might look like it’s steamy, and it’s not steamy at all. Still, it’s a sweet kiss, right? Another problem is that it doesn’t match the other covers. Still, it shows a progression from the first to the second book. The characters are older now (still teenagers, though).

I might leave this cover for a while, and I might change it permanently. I’ll probably leave the old cover for the paperback, unless people really prefer this cover.

I just loooove illustration, if I could I would have four different versions of each book and plus a bunch of character art! ?

Either way, this new cover is an amazing illustration, and represents these two characters quite well. I won’t say who they are because if you know you get extra entries. ?

What do you think?

Let me know below and enter to win a $10 gift card!

So, just to recap, I’ll compare both covers, the old and the new: 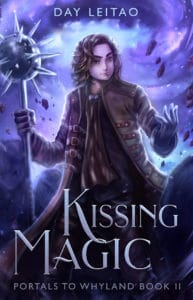 Leave your opinion and enter to win a $10 gift-card below: (scroll if you don’t see all the options)

Thanks! And you can get Kissing Magic on this link: https://www.amazon.com/gp/product/B07PFFYZF6

The Curse and the Prince, book 2 in Kingdom of Curses and Shadows, is out!
Chat with me and Crossroads Reviews on Author Chat on Sat, Jan 9th, 7pm EST
Victoria J. Price on her writing process and covers - The Third Sun tour
Author Benedit Patrick on his writing - To Dream and to Die as a Taniwha Girl
The Curse and the Prince Cover Reveal
07/22/2020 - Category: Day Leitao's books / Portals to Whyland - Tags: Cover art / illustration / Kissing Magic

Love the colors and the whole artwork. Goes well with the covers you chose for the series. If they read the words on the cover, they’ll realize it’s a fantasy too.

Not that the new illustration isn’t nice, but it makes me think of my mom’s Harlequin romances, which I wouldn’t touch with a ten foot pole, so I would not likely look further to see what it is about if I didn’t know it was your series. The original cover is more eye-catching and invites you to read the description.

Yes, that’s my issue with this lovely illustration. I looked at it and thought it was like romance. I love, appreciate, and respect romance authors and readers, but I don’t read it either. So it’s good food for thought.

Yes. I still love the artwork, though!

I like them both! If you’re able to make changes, maybe the new one will look less romance if the characters appeared more in the style of the old cover? Or perhaps they’re not intimately embracing but still reaching for a kiss?

I can’t make any more changes. And yes, I love the artwork but it looks like romance. Maybe one day fantasy covers wil look like that and I’ll be ready.

Yes! Because books have different personalities. Like us with different clothes… Most stores only display one cover, though…

Really love the new art style and I might have to check out this series now. ?

Awesome. I love it, too. Yes, if you want more grown-up reading you need to start with Kissing Magic. But they’re still teens, with teen problems, teen angst…

Haha! Yes, it does. But it’s pretty, right? I think most people prefer the old cover, so I’ll probably go back to that. I’ll use the artwork in the interior and for promo because it’s so pretty.

I really like the new cover, I love the purple and blue background, it really pops out!

Yes. I love the little hints of blue!

Both covers are nice, but I really like the new version. It’s a bit more “grown up” for me.

Yes, it is more grown up!

I LOVE the new cover but I feel it doesn’t fit at all with the series. They look way too old for the actual characters and it does feel like it’s too romantic more than a fantasy story.

I agree it doesn’t fit that much. I’m not sure if they look too old, though. I think a male teen without a delicate face would look like that. I feel they look right, but it’s a matter of opinion, right? Thanks so much for the comment.

Yes. She’ll be doing more covers. Her work is fantastic. I love the other artist, too.

I love the new artwork.

I’d go with the 2nd. But add something floating around. Wands, glazing balls, cats, astro signs, crystals, ets. And maybe put them with different clothes. Something needs changed.

I agree. I feel it lacks something magical, right? I feel it’s my fault for not giving references for clothes, and I also should have asked for a background. That way it wouldn’t look like contemporary romance.

I myself prefer the cover with the single character.
Like you said it’s not a romance so I like the single person best

I can see why you’re feeling torn… that new artwork is gorgeous! I love the new cover, BUT, unfortunately, it really doesn’t fit with the others in the series. ? I don’t think I’d make the switch without committing to a series cover overhaul so that everything feels visually cohesive.

As for genre, it reads like Fantasy Romance to me. Though the costuming does read more urban fantasy/contemporary when compared to the previous version.

Having read the entire series I will say that the ages on the new cover are much more appropriate as the current series covers are more younger imo.

But I don’t think the kiss pose conveys the core story at all of the series. I think a more action style pose in that style would be perfect.

I agree the ages are right. And yes, maybe I’ll redo all the covers one day…

I’d say the 2nd option evokes romance on a grander scale, so if that’s not a message you want to focus on, then maybe the 1st one is better? But I love the new illustration so much! Maybe it could be included as an order gift/incentive or something alike? I love how the entire series looks together!

Yes. Maybe I wanted a beautiful character art and used the cover as an excuse.